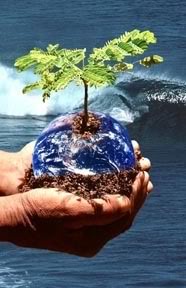 When heading for the edge of a cliff, the solution may be as simple as turning around and going in a different direction.

Earth Day began 45 years ago on April 22, 1970. The first Earth Day mobilized huge numbers of people to become active in efforts to curtail pollution and protect important ecosystems like forests. As we approach Earth Day this year, the founder of the Rainforest Action Network, Randy Hayes, and other visionary leaders are calling for a doubling of the native forest canopy on the earth. They are circulating a petition calling on all people to work together to achieve this goal. (See petition below.)

Here is the big economic connection: forests help regulate or moderate the global temperature, which is essential to prevent enormous losses in grain yields–losses that could spawn food riots and wars. Plant ecologists estimate that at high temperatures, every increase of one degree Celsius causes a 10% drop in grain yields. An urgent global effort is underway to hold the increase below two degrees Celsius. This cannot be achieved unless changes are made to save and restore forest cover.

In addition to the threats to grain production from global temperature increases, the dramatic loss of native forest cover is causing devastating harm to the life support systems of our planet. For instance, forest destruction is a major cause of loss of plant and animal species, water loss, desiccation of the land, soil erosion, and sedimentation of fishery habitat. The loss of forests exacerbates climate destabilization, leading to more severe and costly weather disasters now amounting to several hundred billion dollars per year. The destruction of forests is leading humanity away from a sustainable civilization and a prospering true cost economy.

Here are a few facts about what has been happening to forests this century. The World Resources Institute (WRI) estimates 12% of human-generated greenhouse gas emissions come from deforestation and degradation of forests. About 30% of the world’s forests have been cleared and another 20% degraded. Only about 15% remain in relatively healthy native condition. Global deforestation rates are severe, with 13 million hectares having been lost each year from 2000-2010.

Fortunately, there is hope because experts have identified a huge potential for restoring forest cover equivalent to an area twice the size of China (2 billion hectares). Even in severely degraded zones such as the Loess Plateau in China, some successful measures have curbed erosion and brought back a lush vegetative cover that has improved food security, biodiversity, and local income. Since Earth Day 1970, impressive efforts have been taken to set aside forest lands for parks, wilderness, wildlife, spiritual contemplation, and protection of water supplies. We can build on these.

Across the globe, there is hope because communities with legal rights to at least 513 million hectares of forest, making up one-eighth of the world’s forests, have succeeded in forest preservation. These community forests hold an estimated 38 billion tons of carbon. If these forests that act as carbon sinks were eliminated, there would be a huge increase of carbon released into the atmosphere. WRI calculates that this amounts to 29 times the annual carbon footprint of all passenger vehicles in the world.

One example of the success of forest communities can be seen in the Brazilian Amazon, the largest intact forest in the world. From 2000 to 2012, deforestation was 11 times lower in indigenous community forests that have strong legal recognition and government protection than in other parts of the Amazon.

We are at a crossroads. The courageous step called for in the petition below could help lead us to a future no longer driven by overconsumption of natural resources, technologies that needlessly damage the environment, overpopulation, and political economies that foster problematic consumption.

To live in harmony with the planet and each other we need the courage to act on a shared vision of a better world. And we need to act NOW.

We, the undersigned, put forth these collective thoughts and invite others to share their visions.

• We know forests are a fundamental expression of the natural world and are key to supporting all life on Earth.

• We have witnessed how the destruction of the world’s forests degrades the quality of human life and undermines the prospects for productive and vibrant economies.

• We know that carbon-rich natural habitats are critical to the restoration of natural climatic patterns.

• We believe we must reverse the frightening concentration of greenhouse gases–now at 400 PPM–and get back to pre-Industrial Revolution levels of 280 PPM.

• We believe that this dramatic mathematical U-turn is our only hope of preventing the blue sky from turning into a toxic furnace.

We, the undersigned, call for:

• A halt to all deforestation.

• A doubling of the native forest canopy in less than two decades.

Furthermore, we call for this with the intent to:

• Help return the natural balance of greenhouse gases and foster a healthy society.

• Maintain natural functions to purify the air and water and support the web of life.

Finally, we call upon all people–our communities and our business and political leaders–to work together to achieve this goal.

Such a courageous step could help lead us to a future no longer driven by overconsumption of natural resources, technologies that needlessly damage the environment, overpopulation, and political economies that foster problematic consumption.

When heading for the edge of a cliff, the solution may be as simple as turning around and going in a different direction. Native forest protection and restoration is key to this sensible U-turn. A shift to a better world is within our grasp, but we must collectively envision and enact it.

This is the great U-turn we seek.

Add your signature to this petition at